A New Feeding Strategy for Hippocampus sp. and Other Fishes

Copyright 1996. Reproduced by permission.
(This article first appeared in Volume 4, Issue 3,
The Journal of MaquaCulture, 1996) 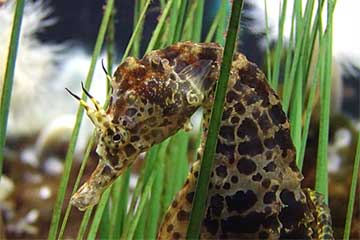 The idea for this approach to feeding "slow" feeding fishes came during a visit to a large marine wholesaler in New York. I noticed large bare tanks of Hippocampus species. They were fed in the morning, and within a few minutes all of the Artemia was in the filters.

Seahorse have been long considered difficult to maintain because of their feeding habits. Paul Baldassano discusses a new method for overcoming this obstacle. If the fish were not shipped in a day or two they would often die from starvation. Lacking a well developed stomach with only a short intestinal tract they have no capacity to store food and must feed continuously (Giwojna, 1994). Systems which have continual filtration make continual feeding difficult to provide so I decided to take home one of these creatures (a female) and see if I could not solve this problem.

The seahorse was placed in my 24-year-old, 100-gallon reef tank where she immediately started looking for food. In a well established aquarium there is always something to eat, but seahorses seem to be discriminating feeders and must "follow" the food around before eating it. In my tank the "food" often disappeared into the rocks before the seahorse would eat it. I solved the problem by making an enclosure from some screening and placing brine shrimp into it. To my amazement the seahorse went straight to the enclosure and began to "suck" out the shrimp one at a time. After a few minutes she would stop eating and rest for approximately an hour before feeding again. Even when the enclosure was empty she would stay close-by keeping a watchful eye for any sign of movement from within.

Several weeks passed and the female began to appear gravid (rather than just well fed) so a male was added to the tank. The female was extremely aggressive with regards to courtship and did not stop this behavior until the eggs had been transferred into the males pouch. Twenty days later the male gave birth. After six months the adults are still spawning and I have some of the young.

The other fish in the tank have learned that the enclosure represents food, and the seahorses had to be isolated as the other fish "monopolized" the feeder. The enclosure has proven helpful with other selective feeders such as Copperband Butterflyfish (Chelmon rostratus), Green Mandarin (Pterosynchiropus splendidas), "Long-nosed" Butterflyfish (Forcipiger sp.), Cowfish (Lactoria sp.), and other fishes.